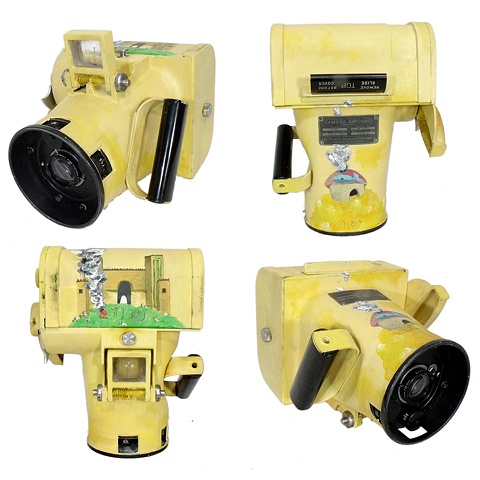 the Travels of Jonah
Oil Paint on K20 Aerial Camera
next >

A WWII era functional aerial K20 4x5 roll film camera illuminated with icons representing the story of the biblical prophet of Jonah, Yunis. Original issue carrying case included. One side of the camera depicts the ancient gates to the city of Ninevah, modern day Mosul, Iraq. The other a humble hut in Joffa, adorned with a painted whale, its water spout also the chimney of the hearth fire.

It is told that Jonah tried to avoid his fate. He was both compelled to travel to Ninevah to preach and teach, but also scared and actively avoiding his calling. He left home traveling the opposite direction, but at some point he changed his mind or was forced to travel towards the Assyrian capital. Once there, he spoke to the people, shared his teachings and influenced a change in culture that brought the people of Ninevah a great peace and repentance. Jonah must've been a wise statesman and prophet.

What was once Ninevah is now Mosul Iraq. It is my homage to the second US Invasion of Iraq, a war and occupation that we are implicated in and yet far removed. A war that we, all allies included, were compelled to engage in despite our reluctance and better judgement. What is done is done, the US withdrew our forces

Since the painting of this piece in 2008 both the shrine of Jonah/Mosque of Yunis in Mosul and the ancient gates to the Assyrian capital of Ninevah have been destroyed by ISIS.

As I write this, the Iraqi army is attempting to break ISIS's hold on the Mosul and reclaim their last urban ISIS stronghold. I wish them luck and safety, especially to all of the nearly 1 million people caught in the crossfire. I hope that future generations will be able to discover and recall the ancient stories of unity and cultural exchange that Ninevah had been known for and can reclaim some of the ancient relics that ISIS has destroyed.